Call me cliché, but I’ve endlessly rewatched Sex and the City. I adore Samantha’s wit, Miranda’s realism, Charlotte’s puppy-dog naivety and enthusiasm, and Carrie…is, well, Carrie. Love her or hate her, Sarah Jessica Parker’s character is an icon in her own right.

One of my favorite parts of rewatching the show is examining the outfits and accessories – I especially love Samantha’s penchant for eye-catching, oversized Chanel earrings; Charlotte’s Elizabeth Taylor transformation; Miranda’s subtle but stylish Hermès clutches; and Carrie’s endless collection of Dior Saddle bags and Fendi baguettes.

All four women on the show are dressed impeccably well at the handiwork of Patricia Fields, and our protagonist Carrie has arguably some of the most iconic outfits on the show (that newspaper dress!), and in fashion history. Below you’ll find my favorite Carrie Bradshaw outfits in no particular order. Which ones are your favorites?

No list of SATC looks would be complete without this iconic lewk: John Galliano’s newspaper dress for Christian Dior. Carrie wears the dress in Season 3, Episode 17, when she meets with Natasha for lunch (well, more like ambushes Natasha and “ruin[s] her lunch”). According to @everyoutfitonsatc, Galliano plagiarized the idea from a 1935 Elsa Schiaparelli print comprised of her own press clippings. Galliano was also apparently inspired by homeless people on the streets of Paris, as well as “Tramp Balls,” which were lavish parties in the ’20s and ’30s where “Parisian socialites dressed up like poor people for fun.” 🥴  Critics were rightfully enraged by Galliano’s “Hobo Chic” 2000 couture collection, and he ultimately reworked the theme into the next Dior RTW show, where this dress was born. It even inspired the “Derelicte” collection in Zoolander. Its origins may be less than savory, but this dress is a key part of SATC history.

Naturally, Carrie’s look for babysitting Brady is a light pink Louis Vuitton suit/skirt set paired with sky-high heels (Season 6B, Episode 3: “Catch-38”). For a casual finishing touch, she adds a fabulous Hermès Kelly bag. Complete with white gloves, a newspaper boy cap, and an oversized pearl bracelet, this look showcases Carrie’s commitment to fashion even in the most mundane situations. (To be fair, I guess Stacey from the Babysitter’s Club might wear something like this, too.)

Carrie’s Kelly is one of many unexplained Hermés pieces in her wardrobe. Our financially-stunted, beloved advice columnist somehow manages to wear a variety of Hermés handbags in this season – including a red crocodile Birkin strewn across her lap as she eats popsicles (like what?! How would Carrie afford any of this…?)

I love a good glove moment, and I absolutely adore this prim white suit Carrie wears when she visits Big’s office. Of course, this is also an iconic episode (I think every SATC episode is iconic tbh tho) – the one where Carrie realizes she has spent $40,000 on shoes in her lifetime (relatable) and fights very awkwardly with Charlotte about money. I still cringe when I watch this episode, but that happens a lot as I rewatch SATC! It’s a problematic show and not without its faults, but the fun parts – the fashion, the friendships, and the humor – make it magical.

Everything about this bubblegum dress is dreamy, including the story of how Carrie receives it. Carrie first spots the pink Oscar de la Renta dress in a magazine and reads the description aloud to then-boyfriend Petrovsky: “Sleeveless, silk, faille, full-skirted dress with black patent leather bow belt; now that is pure poetry.” Of course, naturally, Oscar (first-name basis) is a close personal friend of Aleks. Later, Aleksander casually gifts the hot-pink cocktail dress to Carrie for their date to the ballet. They ultimately skip the ballet and end up at McDonald’s (which I’m high-key convinced is a secret show sponsor due to how often it pops up in the series). Eating McDonald’s in Oscar de la Renta is #goals tbh.

It’s hard to narrow down a favorite look from Carrie’s brief stint in Paris, as our leading lady sports a variety of note-worthy, fabulous outfits. This eye-catching look is super glamorous, complete with a fur muff and a big tulle skirt, a nod to Carrie’s intro-sequence tutu. Carrie wears this when she bumps into Big after she and Aleksander have an argument. The tutu bookends the series with a nod to Carrie’s young spirit and brave fashion choices. 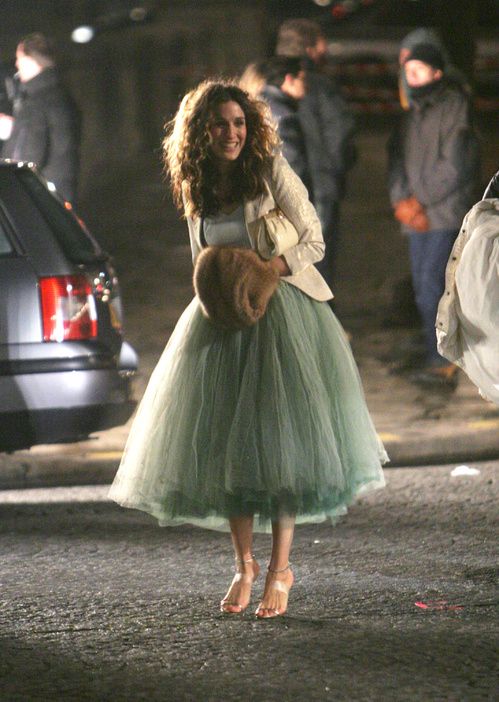 Despite its simplicity, this is an iconic Carrie look for me. She wears this dress to meet the other three leading ladies after dumping the short-story writer who also inexplicably appears as another love interest in Season 1 (Justin Theroux plays Vaughn Wyse in this episode; in Season 1, Episode 7: “The Monogamists,” he plays Jared, whom Carrie meets at a “cool party for people under 30”). This outfit is classic Carrie – sky high heels, a form-fitting dress, a designer bag, and natural curls. 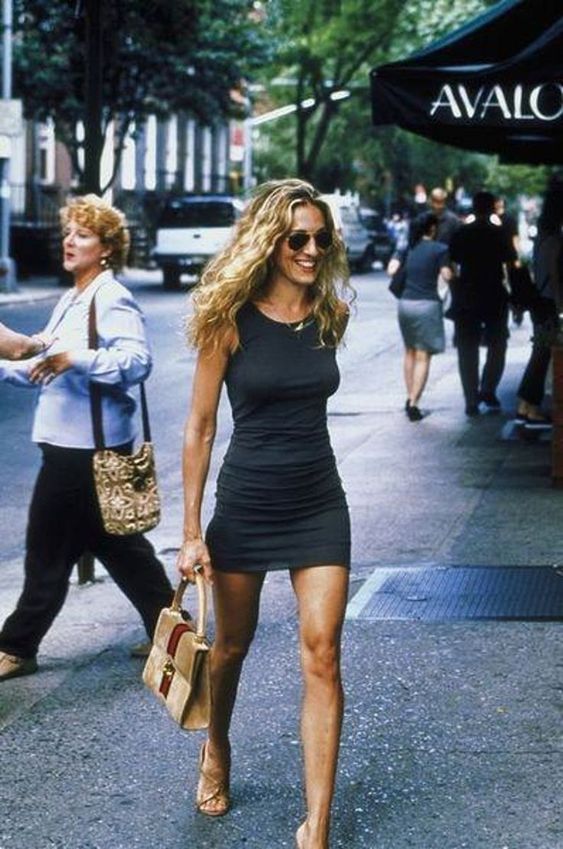 7. Carrie’s white Ralph Lauren vest and pantsuit in the first Sex and the City movie

In the first SATC movie, the fab four finally reunites – with a higher costume budget. 😏This white vest pantsuit look feels like Carrie may have picked up some inspiration from Elle Woods, Blair Waldorf, or Cher Horowitz. The preppy pink striped Ralph Lauren button down makes this downright Legally Blonde-worthy. All of Carrie’s pieces are by Ralph Lauren, with the exception of her shoes, which are unsurprisingly Manolo Blahniks. I have a soft spot for the wardrobe choices made for the aforementioned fictional female characters, so this look gets it right for me. It’s a bit daring, but I love how extra it is, and the giant hat box is just the perfect extra crazy Carrie accessory. 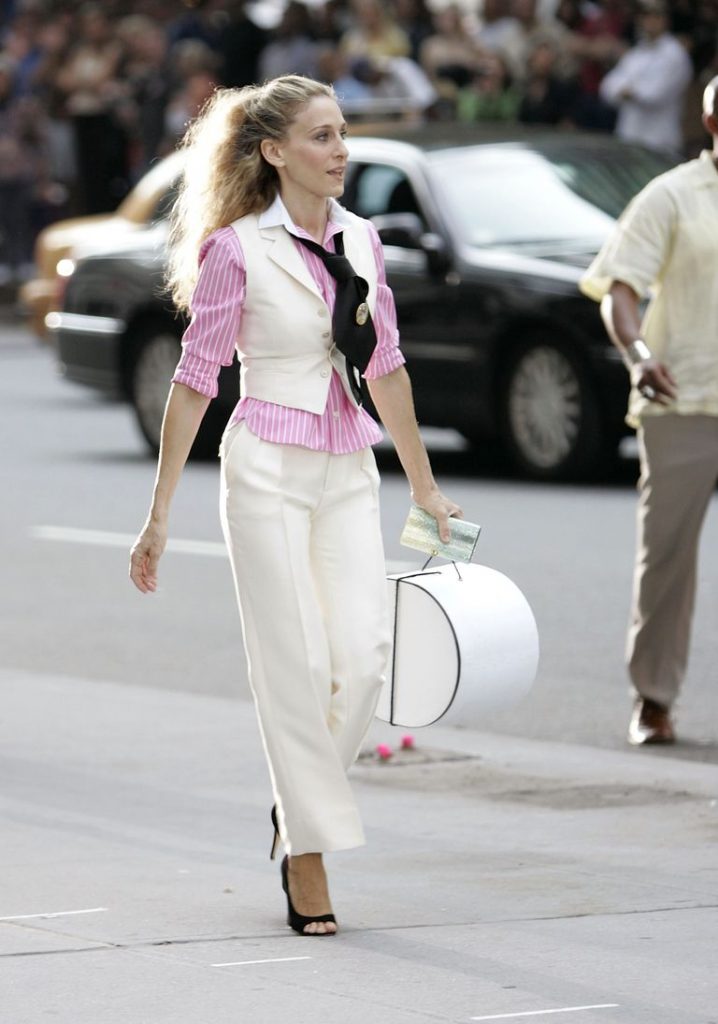 8. Carrie’s signature fur, paired with pajamas and heels in the first Sex and the City movie

When there are both Chinese food and your BFF’s happiness at stake, you make your way downtown, walkin’ fast…in white heels through the snow. I love this look because it is so unrealistic, so unwearable, and so. Ridiculously. Carrie. It reminds me of Carrie’s often inappropriate but bold fashion choices, like when she wore Louboutin heels to the stable with Charlotte in “Ex and the City” (season two, episode 18). Our protagonist never fails to throw on a pair of heels in the most inopportune moments, and I respect her dedication. This look is so casually luxe: Carrie’s iconic fur coat is layered over comfy PJs, topped off with a string pearls, a luxe hat, and white booties. The idea of rocking a fur coat, heels, and your PJs as you run to meet your friend to eat some Chinese food in your pearls is kind of endearing. 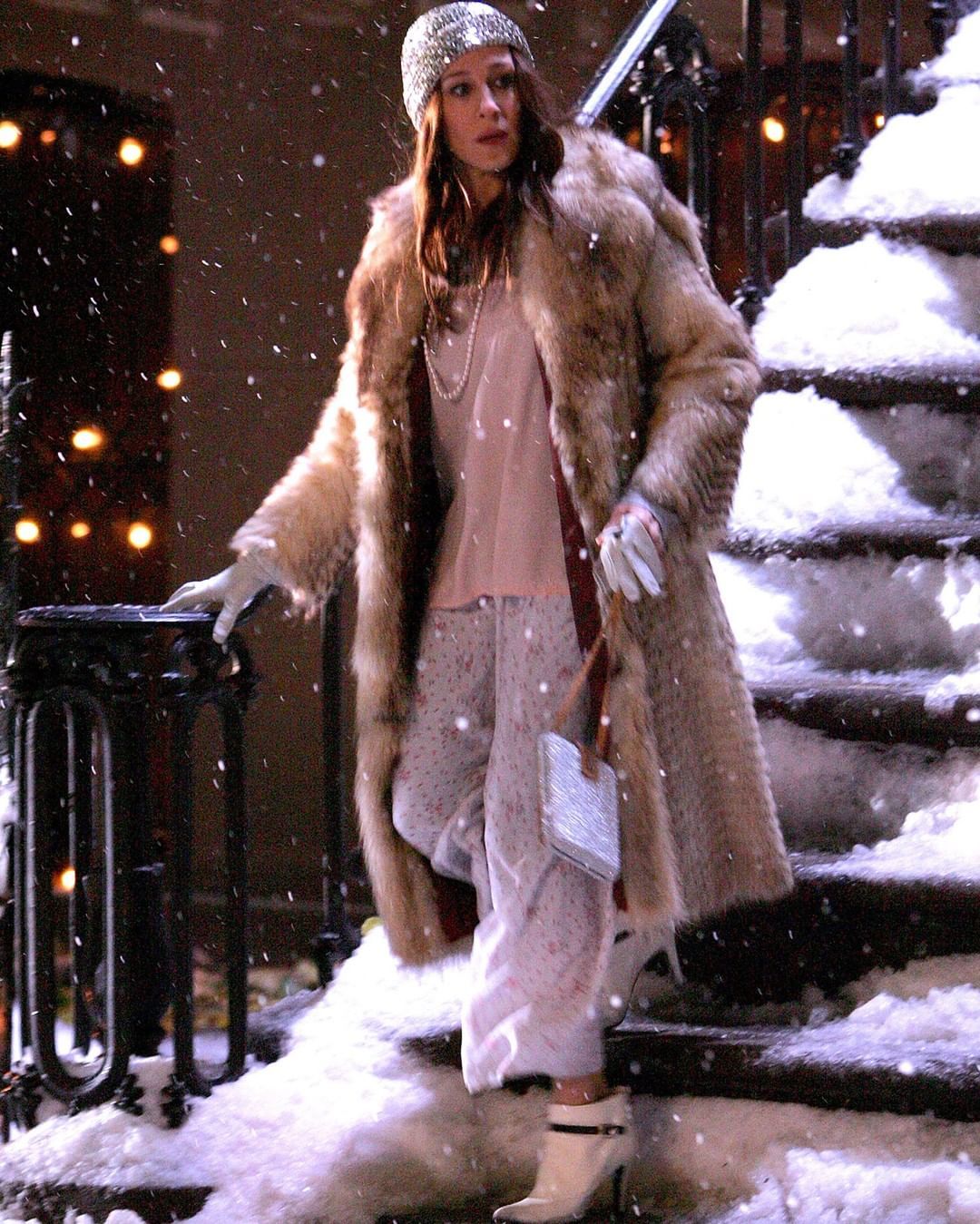 9. Carrie’s romantic floral dress in the Season 3 finale (“Cock a Doodle Do!”, Season 3, Episode 18) – right before she and Big fall into the pond near the Central Park Boathouse

In the third season finale, Carrie meets Big at the Central Park Boathouse in a fluttery, feminine, floral-print dress that I absolutely adore. The delicate dress has an asymmetrical cut and a flounce hem; Carrie pairs it with PVC mules. Apparently, Sarah Jessica Parker cut her foot filming this scene and needed a tetanus shot right after. 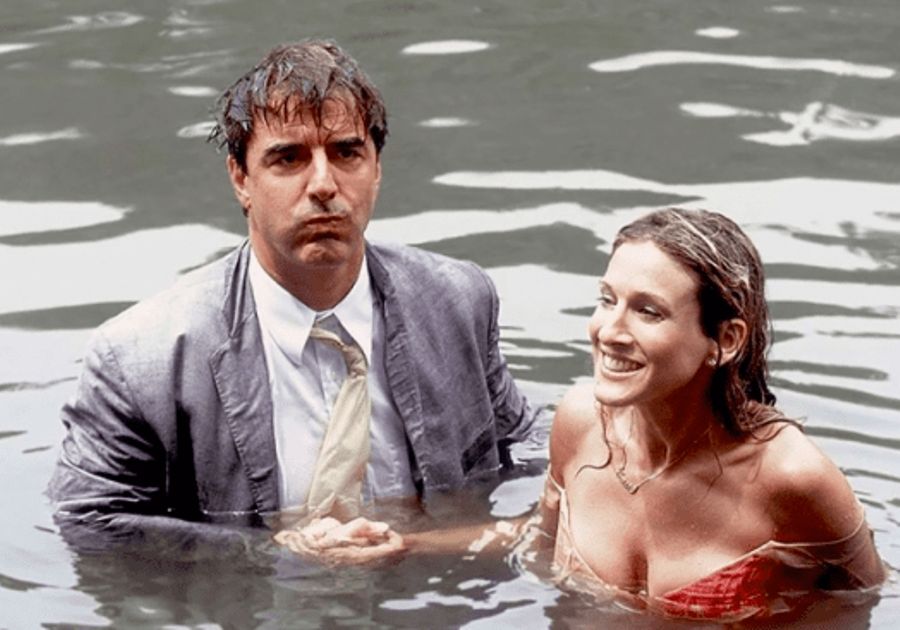 This episode marks the beginning of Carrie’s work with Vogue. She dons her best chic businesswoman suit, a pinstripe Vivienne Westwood, to dress for the occasion – but her article comparing men to accessories is, as Cher Horowitz might say, “brutally rebuffed” by her editor Enid. Despite her unsuccessful article and subsequent belligerence, Carrie still looks the part of an aspirational, chic Vogue writer. I find this striped suit super stylish and I adore the cameo brooch Carrie has paired with it. 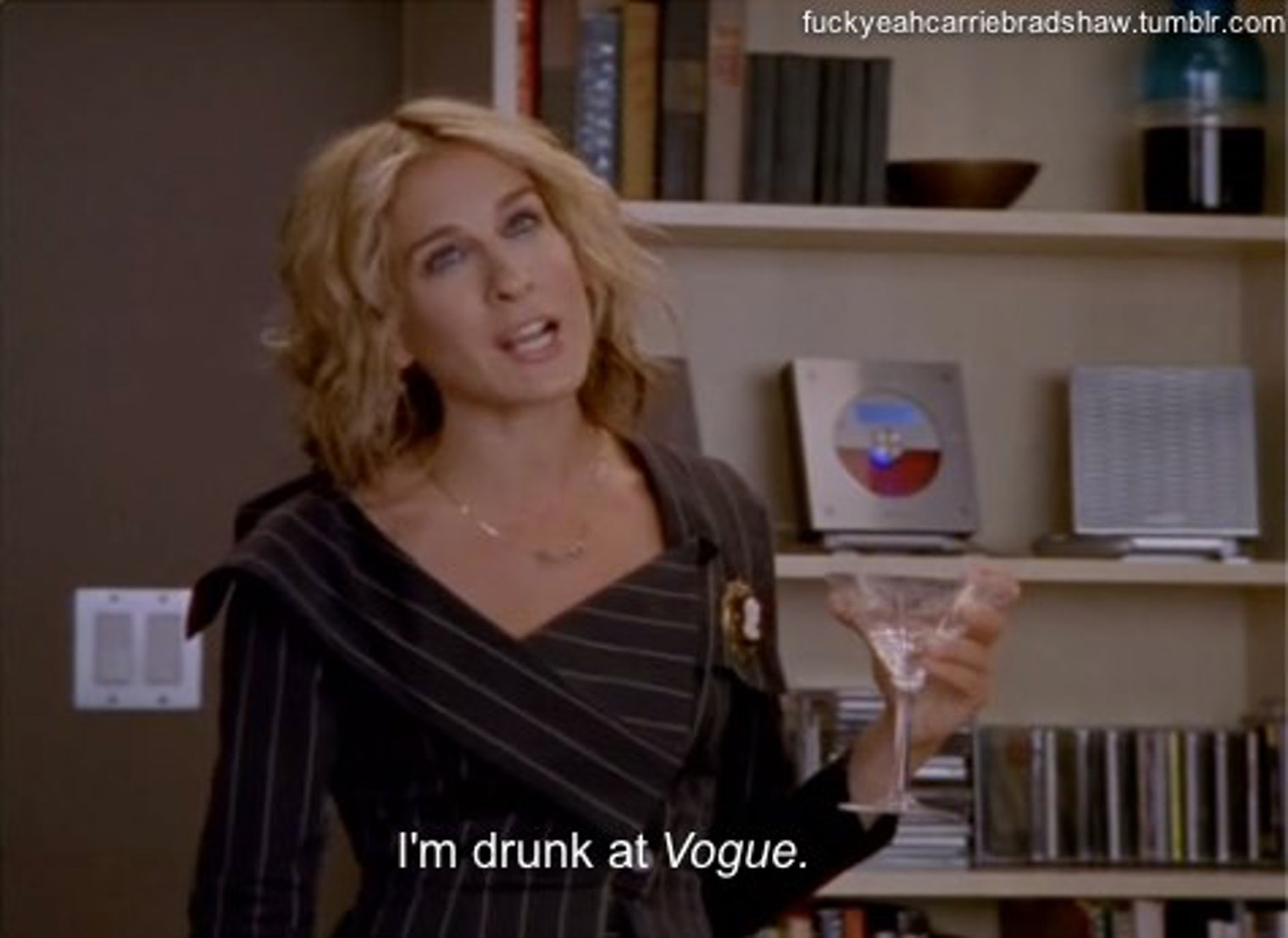 Did you enjoy these looks or did you feel these were fashion flops? Let me know YOUR favorite Carrie Bradshaw looks in the comments!

I Think About This A Lot: The YSL Arty Ring